Details on the weekly Where's It Wednesday puzzle here.
Other weeks' puzzles here.
Answer to the puzzle of two weeks ago, after the jump.

Last week I did not post in solidarity with the Internet blackout against SOPA and PIPA. So the last puzzle was from two weeks ago, and shows the carved bas-relief to the right of the entrance at 215 Columbia Street, on the corner of 3rd Avenue, the former home of the Seattle Chamber of Commerce. 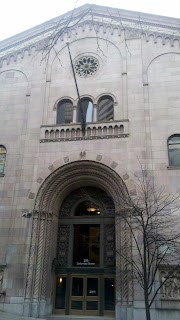 Built in 1924, the architect was Harlan Thomas, noted professor of architecture at the University of Washington, and designer of the Sorrento Hotel and several other local buildings. The building is unique in many respects:


Located at the SW corner of Third Avenue and Columbia Street, this highly distinctive commercial building exhibits exterior features drawn from Italian Romanesque designs, specifically 12th century churches located in the Piedmont/Lombardy region. The most prominent four-story portion of the building is oriented toward Columbia Street and is evocative of a basilican church façade. It is juxtaposed to the three-story commercial block portion of the building at the corner of Third Avenue and Columbia, which is also overlaid with Lombardic architectural ornament and detailing. The steel and reinforced concrete structure measures 111’ x 120’ and is clad with cast stone (fabricated by the Olympian Stone Company) in thirteen subtly differentiated hues of buff with pink, light blue, and yellow highlights. The varied hues and grooved texture give each panel the appearance of hand-cut stone reminiscent of medieval construction. The building is unique to Seattle architecture due to the particularly rich ornament at the Columbia Street entry facade, which exhibits a combination of distinctive early Christian and medieval motifs. The prominent two-story central entry portal is flanked by horizontal friezes depicting native and modern industries in Washington State presented in a distinctly Romanesque design mode. The multiple twisted and incised columns and arches within the portal are indicative of both Celtic motifs used in early Christian art as well as Muslim and Arabic design precedents that influenced Romanesque architecture. The pedimented façade is capped by a Lombardic-inspired frieze above an arched corbel that depicts animals indigenous to Washington State. The façade is further distinguished by arched wall elements, arched window openings and ornament and a central rosette window. The rosette window and multiple arch motifs are incorporated into a highly ornate window wall located above the modern bronze doors at the entrance vestibule. The more conventional three-story portion of the building exhibits a two-part commercial block façade composition. It was originally distinguished at the storefront level by wide segmental arched openings with multi-paned mezzanine level windows. These opening have been rebuilt to include modern round-arched storefront construction. The east elevation is divided into seven bays and the north elevation into three bays, with sets of windows at each of the upper floor levels. The Romanesque revival design is conveyed via round-arched window openings at the upper floor level, recessed spandrels with multiple arched panels and a distinctive Lombardic corbel table at the parapet. In addition to the storefront alterations, all of the original double-hung and multi-pane window sash appears to have been replaced by fixed glazing panels. The entire interior of the building has been repeatedly remodeled and there are no significant interior finishes, features, or public spaces.

A more complete picture of the building here. The frieze to the left of the door depicts various activities of the local tribes, but the leftmost image is really puzzling: 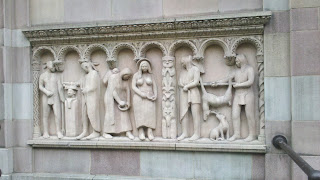 Is it a magic act?

The frieze to the right appears to show a farmer, a woodcutter, a ship captain, a fisher, a general laborer, and one other fellow holding what appears to be a gear, perhaps some kind of wright?
Posted by Unknown at 11:25 PM