Where in Seattle is this? Last week's picture is from the Olympic Sculpture Park: 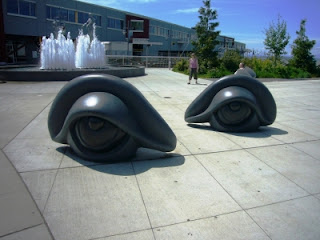 The picture of one of the three installations of Eye Benches by the late artist Louise Bourgeois is taken from the northernmost end of Alaskan Way along the waterfront.


The "Eye Benches" created by Louise Bourgeois are located by the waterfront entrance to the Olympic Sculpture by another of her works "Father and Son" The functional and fun Eye Benches actually provide a surprisingly comfortable place to sit and watch the fountain, views of Puget Sound, the Olympic Mountains and waterfront activity.

The French artist lived most of her life in New York City:


Louise Bourgeois was born in Paris in 1911. She studied mathematics at the Sorbonne when she was 15, which lead her to discover cubism through geometry. She went on to study at the École du Louvre and the École des Beaux-Arts, which gave her a possibility to work as an assistant for Fernand Léger. In 1938 she moved to New York with her American husband, Robert Goldwater. This was an important decision, as she felt that she could not have continued to work as an artist if she had stayed in Paris. She lived and worked in New York until the end, during the spring of 2010.