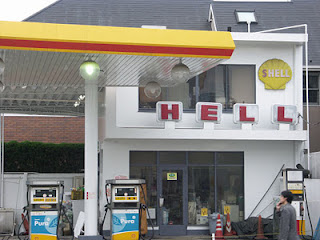 ~ What you pay at the pump for gasoline is the product of six main factors, especially well-known ones like the cost of crude oil, refining, taxes, and what Big Oil spends purchasing Congressional outcomes.

Today I learned of another, much less well-known factor: shortages of numbers.

Yes, numbers. The ones that gas stations post on their marquees that tell passing drivers the price of each octane blend.

I was driving from Bellevue to Pullman to meet with the Phytelligence team, and stopped in Othello for gas. I drove into the Union 76 station right on the corner of SR-26 and started pumping. The pump said each gallon was $3.53* which seemed like a pretty good price for 91 octane.

As I'm standing there admiring Othello's scenic strip of fast food outlets and asphalt acres, I look up and see the price of $3.52* on the nearby marquee and $3.52* across the street at the Chevron station. I finished, went inside to get a receipt and remarked to the gal behind the counter that the marquee and the pump had different prices (by a penny, but still.)

She pointed out that the marquee was actually for next door's Shell station, and that the Union 76 marquee was correct—true!

Now here's the funny bit. She added that the Union 76 station and the Shell station had the same owner. And, in response to my conjecture, that yes, in fact, the same distributor supplied both stations.

However, the Union 76 station had run out of the number '2' to put up on the marquee, so they had to raise the price a penny and put up a '3' instead! Apparently, there was some good-natured wrangling between the managers of the two stations about borrowing numbers and which station (with the same ownership) would have to put up the higher price.

Well, one cent a gallon isn't that big a deal; it cost me an extra 18.5 cents to fill up. People complain about high gas prices, although gas is actually a pretty cheap processed fluid, and our demand for it is quite inelastic. Quoth the Bard: "‘T’is neither here nor there."

I offered to bring them a whole bunch of extra '0' numbers next time I came through. Could that also be what Michele Bachmann was, er, thinking?

* Plus another 9/10 of a cent per gallon of course, like all such prices. How stupid is that? Or should I say, how stupid are we?
Posted by Unknown at 11:37 PM