~ An idea whose time is now: "End corporate rule; legalize democracy". Amend the Constitution to reassert the primacy of the people.

The words corporation and corporate nowhere appear in the Declaration of Independence or the Constitution, or in any of its amendments. So why does our activist Supreme Court make up rights for them (Citizens United) that allows the utter corruption of our democracy by unlimited contributions to supposedly independent corporate bagmen? Mitt Romney even thinks corporations are people. Corporations aren't people, even if you can execute one. 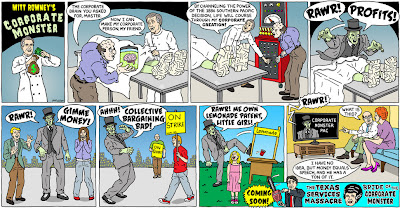 Oh, and if corporations are people, shouldn't they be paying much higher taxes? Shouldn't corporations go to jail if they break the law? It seems they get all the rights and privileges, but none of the responsibilities.

It is time to restore government of, by, and for the people. Corporations should not have the same standing.
Posted by Unknown at 10:15 PM