The world's population is depleting too many things. While it may be possible to develop alternatives for some materials, it will not be easy to replace the substrate that nourishes us: 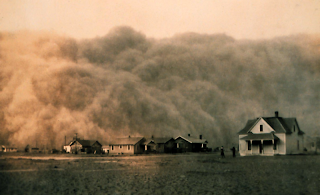 The thin layer of topsoil that covers the planet’s land surface is the foundation of civilization. This soil, typically 6 inches or so deep, was formed over long stretches of geological time as new soil formation exceeded the natural rate of erosion. But sometime within the last century, as human and livestock populations expanded, soil erosion began to exceed new soil formation over large areas.

Topsoil is eroding away in much of the world, exacerbated by climate change and the increased plowing and livestock raising necessary to feed an ever-growing population. Wind and water are taking it away in the Middle East, in many parts of Africa, in the Amazon, and in many other places.


China faces similarly difficult challenges. After the economic reforms in 1978 that shifted the responsibility for farming from large state-organized production teams to farm families, China's cattle, sheep, and goat populations spiraled upward. While the United States, a country with comparable grazing capacity, has 97 million cattle, China has a slightly smaller herd of 82 million. But while the United States has only 9 million sheep and goats, China has 284 million. Concentrated in China’s western and northern provinces, sheep and goats are destroying the land’s protective vegetation. The wind then does the rest, removing the soil and converting productive rangeland into desert.

China's desertification may be the worst in the world. Wang Tao, one of the world's leading desert scholars, reports that from 1950 to 1975 an average of 600 square miles turned to desert each year. By century's end, nearly 1,400 square miles (3,600 square kilometers) were going to desert annually. Over the last half-century, some 24,000 villages in northern and western China have been entirely or partly abandoned as a result of being overrun by drifting sand.

China is now at war. It is not invading armies that are claiming its territory, but expanding deserts.

In the future, we're all going to be eating less meat. Don't count on replacing it with fish either.
Posted by Unknown at 11:25 PM