Oil Lobbying Gets the Government it Pays For 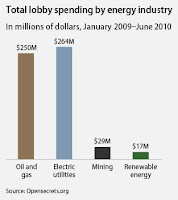 President Obama has finally admitted the obvious: there will be no climate and energy bill until 2011. As another example of his tendency towards unilateral compromise, he now suggests that legislation may be done in "chunks" rather than as part of a comprehensive, balanced effort.
What he doesn't admit is that there may never be a climate and energy bill of any ambition, that departs from the status quo, and that undertakes the sometimes difficult but nonetheless critical steps to make real the vision of a better future for energy and for the economy.

Nor can Obama or really any politican admit the obvious reason, that they, as players in this game, have been bought off. Follow the money:

The 20 biggest-spending oil, mining, and electric utility companies shelled out $242 million on lobbying from January 2009 to June 2010. Trade associations that generally oppose clean energy policies spent another $290 million during this time. This is over $1,800 in lobby expenditures a day for every single senator and representative.

There's more. These figures do not include money spent by trade associations with similar views, nor the array of supposedly educational messaging, nor the Astroturf campaigns, nor the PR spending, such as BP's $5M per week in an effort to burnish its image.

There's no surprise in such spending, they have a lot to protect, and so far the ROI has been excellent.

The purpose of government is to advance and protect the public's interest, not to coddle entrenched incumbents, frustrate their nascent competition, and mortgage the country's future for current profits of special interests. I've asked the question before: what will it take to get our legislators to do their jobs?
Posted by Unknown at 5:38 PM