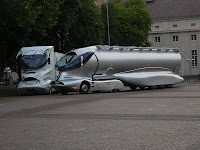 Not content to boost automobile mileage standards, the Obama Administration has now proposed to institute the first ever standards for buses and long-haul trucks, which had previously been exempt.

The administration said the proposal, to be made final next year, will eliminate nearly 250 million metric tons of greenhouse gas emissions and save 500 million barrels of oil over the lives of vehicles produced within the program's first five years.

The rules will apply to the largest vehicles on the roads, including semi-trucks, buses, delivery vans, garbage trucks and heavy-duty work trucks.

"These new standards are another step in our work to develop a new generation of clean, fuel-efficient American vehicles that will improve our environment and strengthen our economy," EPA Administrator Lisa Jackson said.

Lisa Jackson is one of the few people in the Obama Administration who has a spine. One wonders why such things haven't been in place for years. It's not as if the technology doesn't already exist. Nor will it be another supposedly burdensome and costly regulation, as it will pay for itself:


Drivers would see fuel efficiency gains of seven to 20 percent. For example, it is estimated an operator of a semi tractor trailer could pay for the technology upgrades in under a year, and save as much as $74,000 over the truck's life.

"Through new fuel-efficiency standards for trucks and buses, we will not only reduce transportation's environmental impact, we'll reduce the castoff transporting freight," said U.S. Transportation Secretary Ray LaHood. "This is a win-win-win for the environment, businesses and the American consumer."

OK, who do you think will be the first group to reflexively oppose this?
Posted by Unknown at 9:11 PM