It's Ubiquitous and Makes Sense 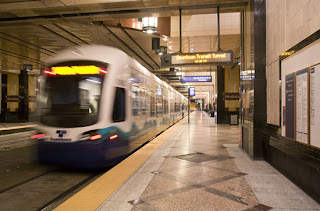 I grew up taking public transit in Toronto. I was getting around on my own before I was 10 and even after I got a driver's license I still rode the Red Rocket quite a bit. Going to college near Boston I started riding the T without giving it much thought.

Living in Phoenix in 1978 and moving to the Seattle area in 1982 I discovered that not all cities have as good public transit, and over the years I took it less. In the last few years as I have again moved back closer to downtown, and as Seattle's Metro and Sound Transit have added capacity and routes I've once again gotten back into it.

It's good. I like it. And of course I feel good about it, especially these days with the high cost of gas and the ever-present reminders of our carbon footprints and the broader implications for society and humankind.

Most of all, taking public transit doesn't seem like (and isn't) a big deal. (It has it warts of course, especially not being able to get home to Bellevue from Seatac airport after 11:30 p.m.—shouldn't all core buses run until 30 minutes after the bars close?)

The thing I find so funny is when people tell me that they "never" take public transit, for which they give a whole variety of reasons.

I always ask them the same question: "Do you ever fly?" Haven't met anyone yet who never has or claims they never will, and these folks don't own their own Cessnas.

They do take public transit. They just need to act locally by taking more of it around town and not just when they go to a faraway town.

Yeah, I know, taking a jet and taking a bus aren't the same thing in many ways. But they're becoming more alike all the time. I remember a Greyhound ad campaign from years (maybe 10?) back where they explicitly showed how they saw the bus and the plane as similar—captain/driver in his uniform at the controls, baggage handlers slinging suitcases, etc. At the time it was rather funny because it seemed so strained—air travel was fun, even still a bit glamorous, and planes had more than one bathroom and got you where you were going in hours, not days.

Funny thing happened though didn't it? While the 'Hound tried to make themselves more upscale, the airlines went into a long race to the bottom, cutting amenities and adding fees. 9/11 accelerated the process which was already well under way before that. Now taking a plane has all the comfort and amenities of taking the bus, but perhaps with even less legroom. So if people can fly why can't they take the bus downtown? Or Amtrak between cities?

I take the bus downtown almost all the time now; the only exceptions being when my travel logistics are too tight or too complicated or when I have too much stuff to wield on a bus. The Internet is great for planning, and I use it to find the public transit alternatives when I fly to other cities. I went into a meeting at an office in Santa Clara two months back and they were stunned when I answered a question by saying I'd taken CalTrain down from San Francisco and the VTA from there. No one could believe it! Afterwards, I walked to the VTA, went back to the CalTrain, changed to BART and got on my plane at SFO and back to Seatac, where I took the bus back to the park and ride near my house. I do this so often now it's easy.

There's no good reason for everyone not to take public transit more often, especially since most people broke the ice on this long ago.

Take more public transit! Reduce your carbon footprint, reduce your stress, enjoy the scenery, maybe even relax with something to read (or do some work!)