What Percentage of Generation Can Be Renewable?

Scotland could be run entirely on renewable energy by 2030 according to a report by the Scotland branches of WWF and Friends of the Earth. The country has already reached its aggressive target of 27%, plans to hit 31% by next year and 80% by 2020. It has the most ambitious renewable energy targets of any country in the world. 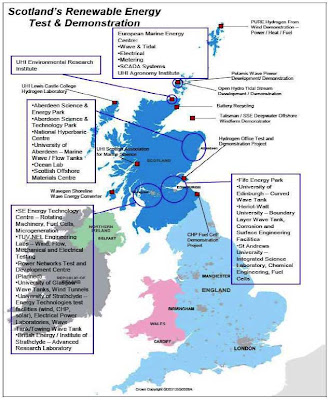 The report examined 5 scenarios, from business as usual to a more active investment posture in renewable generation. Rewnewable generation under the scenarios ranged from 60% to 143% of demand; all included both a phasing out of all nuclear generation and the installation of considerable offshore wind.

Electrification of transport and heating would also allow Scotland to become carbon neutral, as well as sustainable and energy independent.

Scotland has several advantages in addition to abundant offshore wind that make this possible: wave and tidal energy potential, as well as peak electricity demand that is projected to stay flat, or even decline over time.

The challenge for other countries to generate significant amounts of renewable energy will be much greater. However, many countries have substantial resources, whether frmo solar, biomass, or wind. Unlike Scotland, however, they lack the clear vision and political will to lead.
Posted by Unknown at 11:30 PM