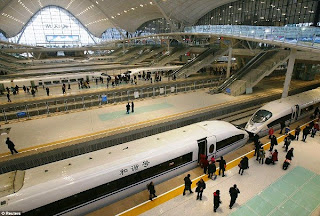 Even as the Eurostar has "fluffy" moisture problems, stranding people in the Chunnel for up to 16 hours, over in China people Saturday started taking trips on the fastest high-speed train in the world.

The new line is 664 miles long, connecting Guangzhou to Wuhan, and will eventually extend all the way to Beijing. Trains average 217 mph, faster even than France's TGV and Japan's Shinkansen.

Here in the United States high-speed rail remains a distant hope. It was 50 years ago that Japan started work on the original Tokaido Shinkansen high-speed train, at 130 mph slow by modern standards, but still faster then than anything built in the US since. The American Recovery and Reinvestment Act (ARRA, the "Stimulus Bill") allocated starting funding, but it won't get much built. Washington, New York, California and other states are fighting over scraps of it and asking for funding well beyond the $8B specifically allocated by ARRA. California voters approved a visionary project with a currently estimated cost of $45B.

Current European problems are somewhat anomalous. High speed trains have been operating for many years throughout Europe with few problems and heavy ridership. The system is extensive. 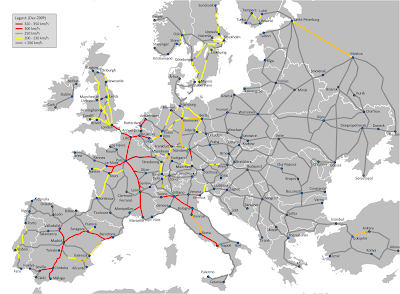 As as is implied by the color-coded segments of European high-speed trains, most passenger trips are of a few hundred miles rather than intercontinental. Trains don't replace airplane trips; they replace car trips because they are faster, cheaper, and more comfortable. Airline travel is increasingly unpleasant, and new security measures are likely to make it more so. In the high-travel transportation corridors especially trains are looking better and better:


...rail has several advantages that make it worth taking even if the terminal-to-terminal time is considerably longer than on air: less time on security lines; arrival in the city center, which is usually closer to where you want to go; electrical outlets!; and 3G internet as I travel.

I'd also add the obvious: you don't need to tuck your knees under your chin to fit in the seat, and you're pretty much free to get up and move around as much as you'd like.