Faster and More Furious with Every Reassessment 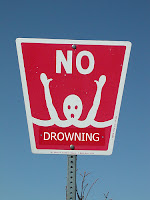 It seems every time there's a revision to estimates of future effects from climate change, they are sooner and more extreme. The latest? More carbon, higher temperatures, and polar palm trees:


The US study predicted that if society continues burning fossil fuels at the current rate, atmospheric levels of carbon dioxide could rise from the current level of 390 parts per million (ppm) to 1,000 by the end of this century.

The last time the world had such high levels of carbon dioxide temperatures were on average 29F(16C) above pre-industrial levels. Evidence has been found of crocodiles and palm trees at the Poles and only small mammals were able to survive.

It is increasingly tiresome to refute the fact-free foppotees obfuscating science with ideology, or excusing the destruction of our habitat because of supposed economic necessity. There are no jobs on a dead planet.

Author of the study Dr. Jeffrey Kiehl of the National Center for Atmospheric Research (NCAR) also took issue with critics who claim to be making conservative arguments:

I couldn't agree more. While some fight the evident reality of a rising tide, others are preparing for real sea change.
Posted by Unknown at 11:26 PM