Island Time Comes to an End

Climate change is raising sea levels. Those seas have swallowed uninhabited islands, and now start to threaten populated ones too:

Carteret Island is part of Papua New Guinea, and one of many Pacific Island communities under threat.

It was widely reported in November 2005 that the islands have progressively become uninhabitable, with an estimate of their total submersion by 2015. The islanders have fought for more than twenty years against the rising ocean, building sea walls and planting mangroves. However, storm surges and high tides continue to wash away homes, destroy vegetable gardens and contaminate fresh water supplies. On November 24, 2005, the Papua New Guinean government authorised the government funded total evacuation of the islands, 10 families at a time; the evacuation is expected to be complete by 2007. It has been estimated that by 2015, Carteret Atoll will be largely submerged and entirely uninhabitable.

The island is still inhabited; as the trailer suggests, many do not want to leave. 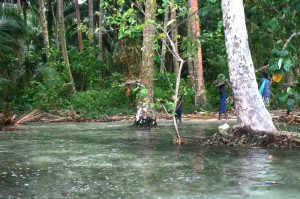 The loss of Carteret Island (and others to come) also means the loss of habitat, species, and culture. Destroying an entire people's home and culture is an international horror, and in a conflict is rightly considered a war crime. This is a crime against humanity where the weapon is indifference and the tool greenhouse gas.

The film has been nominated for an Oscar for Documentary (Short Subject). More here.
Posted by Unknown at 11:41 PM