Does a Bear Sh*t in the Woods? 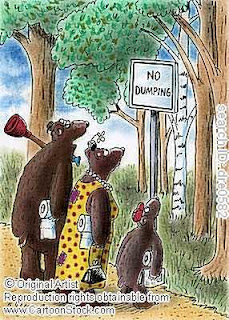 If you let him into your house, he'd also do it on the carpet. It's in the bear's nature. So why are we surprised when oil companies befoul the environment with the devil's excrement?


When an institutional arrangement that results in a predictable, almost inevitable event becomes transformed into a freak phenomenon, the result of a single bad apple so to speak, you pretty much guarantee you’ll be spitting out a lot more rotten apple. Or, to invent an old saying, when you invite a bear into your house and he messes on the floor, don’t blame the bear. When you don’t have anyone watching over corporate accounting, or regulations on collateralized debt obligations, or you allow drilling in areas where plugging a leak strains the bounds of known engineering, you’re bound to end up with Enron, AIG and now BP.  So in BP and the oil lobby’s defense, they are merely the misunderstood bear. “Isn’t this what you wanted,” they ask? Cheap, plentiful oil for everything big and shiny and wonderful?” It must seem particularly ungrateful to turn on them after one, little accident. Was BP reckless and ill-prepared? Yes, but that’s what corporate bears do.  Expecting otherwise will be a ritual of disappointment.

Every part of our economy is dependent on oil and each of us adds to the demand every day. Personally, I hate it, but can't completely get away from adding to the problem directly myself. It will take time and effort to change our energy future to something sustainable and renewable and critically, get away from oil. But in the meantime we must live, however unhappily, with the reality of the crapping bear, both in the energy industry and amongst our so-called lawmakers:


Now we must gnash our teeth and pull our hair as energy policy is shelved yet again due to the pathetic exigencies of contemporary American politics, where nothing, nothing, nothing is ever as important as making your opponent look bad. That this will be considered a ‘victory’ in certain circles is all any impartial observer needs to know to condemn this sham “democracy,” where a supermajority is needed to accomplish anything more substantial than passing a resolution in favor of girl scouts. But who are we to complain – you vote a political bear into Congress, what do you expect?