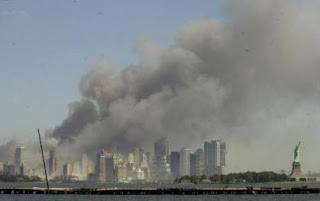 Courage is not absence of fear. Rather it is the strength coolly to act, to choose the sometimes much harder path, knowing the peril.

Courage doesn't come with a rush of blood to the head. Rather it is the lucid extension of principle, the consequence of of core values.

Courage is moral. Courage does not retaliate in frightened violence. It doesn't surrender liberty for safety. Courage does not live in a mob. It is not fomented by angry preachers or outraged talk show hosts. It neither embraces xenophobic jingoism nor demonizes others by stereotype. Such things are cowardice shabbily dressed merely in the costume of courage.

Today, on this Day of Remembrance, let us recall and honor those who have shown the courage that exemplifies our highest values. Tomorrow, let us honor them by placing those values at the fore, shunning the blandishments of pinched political views that appeal to petty and provincial passions.

Can we exhibit the courage of our highest ideals? We can and we must, as our future depends on it.

This is still the home of the brave.