A Clear Advance in Power Generation


[The] proprietary SolarWindow™ technology [is] capable of transforming everyday surfaces, such as glass, into electricity-generating windows... the application of SolarWindow™ to exterior glass surfaces of commercial towers could generate energy savings several-fold greater than today’s rooftop solar systems...

In commercial applications, such as the building facades of office towers, engineers conservatively estimate that installation of New Energy’s SolarWindow™ can generate more than 300% energy savings over conventional rooftop solar systems. Key to maximizing energy production, SolarWindow™ can be applied to the extensive glass surfaces on commercial skyscrapers, an important advantage over conventional solar systems confined to installation on space-prohibitive rooftops. 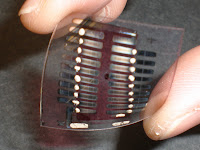 The windows remain transparent even while generating electricity. The spray-on coating can be applied at room temperature and enable the windows to make power from either natural or artifical light. The demonstration at the University of Southern Florida powered LEDs, but the technology can also create enough amperage to power equipment.

Work remains on scaling the technology, production manufacturing and deploying building-scale prototypes. Also no word yet on cost. A cool technology for sure, but not yet commercially compelling.
Posted by Unknown at 11:53 PM