~ There are several interesting variations on the standard electoral map, but best of the bunch is this one: 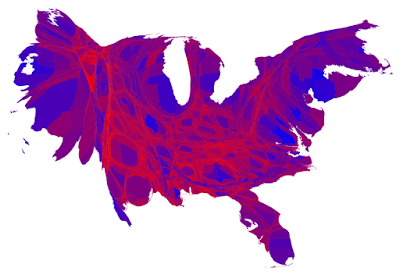 It is a cartogram, a map of the US distorted so that each state is sized according to the data, which in this case is the number of electoral votes each state has. The colors are done on a county-by-county basis and are shaded from red to blue based on the popular vote within a county.

There's a lot of purplish shades, but overall the map is plainly more blue-hued than red.


The election was true blue in many places. Several Tea Party Republicans and Blue Dog Democrats were unseated, and others were given a close scare. The first openly-gay senator was elected, as was Congress' first Hindu and the Senate's first Buddhist. The Democrats gained in the Senate because of wins by progressives and the defeat of several Republicans whose comments on social issues such as rape and abortion were simply too extreme. The GOP held the House, thanks to a nakedly undemocratic gerrymandering after the 2010 census, but the popular vote for House races as a whole was won by the Democrats.

After 32 straight defeats in popular vote contests, marriage equality passed in all 4 states it was on the ballot. For the first time, legalization of recreational marijuana use passed in several states. In Montana, an initiative repudiating corporate personhood passed 3-to-1. Initiatives against Citizens United passed in 150 jurisdictions.

It is long past time to retire the bogus canard that ours is a "center-right" country. Look at the map. Look at the vote counts. Look at the wave of progressive victories. "Center-right" is a marketing message designed to bolster a pseudo-conservative agenda that is manifestly not what a majority of the country believes or wants.

The election has repudiated GOP policies and must be interpreted as a mandate for progressive change. The George W. Bush years were disastrous for the country and the electorate has clearly indicated they want to see President Obama implement more of his ideas and the GOP to stop obstructing.

Four more years. But will they be to implement the will of the people, or to witness continued defiance by Republicans that thwarts solutions to the real problems we face?
Posted by Unknown at 11:41 PM