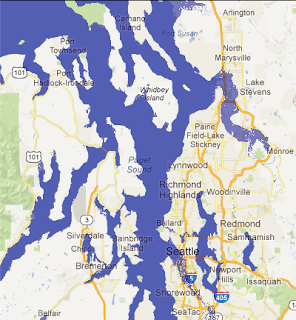 ~ What would Puget Sound look like if it were 5m higher? Among other changes:
How much will the oceans rise? No one knows for sure, but careful estimates over the next century are for 5m or more. Climate change also brings more frequent and ferocious storms. Storm surges can raise ocean levels 5m or more on their own.

Check out the interactive map to see the effect of rising ocean levels of 1 to 60m anywhere in the world.
Posted by Unknown at 11:52 PM