We Don't Want All That Jazz 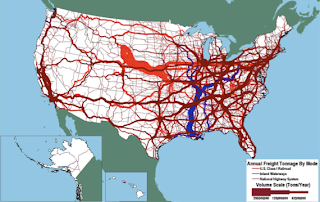 ~ I plucked this map from an unrelated story, but my eye was caught by the fattest red swath.

The map is from 2002 and reflects the transport of coal from the Powder River Basin to power plants in the Midwest and East that generate electricity from this dirtiest of fossil fuels. In the last several years, however, the production of natural gas has spiked and its cost plummeted. Coal-fired plants are giving way to those using natural gas.

Now King Coal and its allies want to export the stuff to East Asia, building export terminals in the Pacific Northwest. The economics make sense for them, but the environmental costs (and economics) for the rest of us do not.

Imagine the map with that fat band of red coming here. Too much pollution, too much traffic, too many problems. Too many trains.
Posted by Unknown at 11:30 PM