Putting Litter to Use 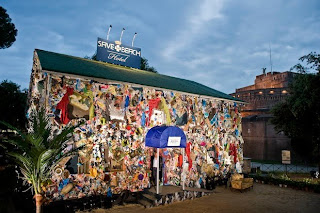 A hotel made from trash:


The Corona Save the Beach Hotel, designed by German artist HA Schult, is open until June 7 near Rome's Castel Sant'Angelo, which is located along the Tiber river.

This is not Schult's first such effort:

"The environmental problem is a global problem. We are living in a planet of garbage," said Schult, whose most famous work is "Trash People," an installation of 1,000 human figures made out of trash.

"Trash People" was installed under the Brooklyn Bridge in New York, in front of the Giza Pyramids in Egypt, in Red Square in Moscow, at La Defense in Paris, and along the Great Wall of China.