How Our Imperfect Market Retards Our Progress 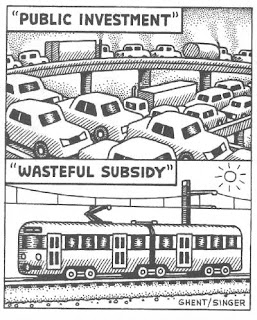 David Roberts at Grist just wrote a succinct post about pricing the externalities of boilers, but it applies equally well to the pricing of externalities for such things as climate change, electricity from coal, shale "plays", deepwater drilling, or any number of other aspects of our dirty energy economy.

Externalities are costs incurred in an activity that are not paid directly by the producer or the consumer of that activity. They are instead "externalized" from the provision of product or service, the economic activity, and are eventually paid by unrelated others, or, most often, by government or by the general public as a whole. In the case of boilers, about which Roberts writes:


They emit toxic air pollutants like mercury, cadmium, and acid gases, which even in extremely small amounts cause a range of health maladies from asthma to heart attacks to premature death, yet the operators of those boilers and incinerators do not pay those health costs. The public picks up the tab for that. You're welcome, boiler operators!

A so-called "perfect market" would not have such externalities, because these are costs hidden from the activity which distort the idealized functioning of a marketplace. Without all information, costs and benefits included, different activities become apparently more advantageous over others because not everything is taken into account.

This is why, in no small part, we continue to have a dirty energy economy. It is why many (sometimes otherwise informed people) complain that renewables are not cost-effective, and our economy cannot afford such things as investments in renewable energy, public transportation, carbon pollution reduction and so on. The fallacy is clear: the larger economy, in a macro-economic sense, already pays the additional costs. Or more precisely, we collectively pay these additional costs in environmental destruction and remediation, increased health problems and their treatment, industry subsidies by government and the tax revenues used to pay for them. In a perfect market, all costs would be transparently known and included in the cost of the activity, and a true comparison could be made.


...private companies who face higher costs will be intensely aware of it and will consequently scream bloody murder. They will funnel money to politicians; they will pay for protests and petitions; they will fund bogus studies showing that the economy will collapse if they have to pay their own costs.

It's a classic political economy dilemma: Losers cry louder than winners cheer. The brute political fact is that any business or industry that has succeeded in externalizing costs is massively incentivized to keep them externalized. There is no comparable intensity on the side of those who would benefit from the shift. In politics, intensity wins. In terms of political economy, the battle is intrinsically weighted against the public interest.

The intensity is amplified by the effects of money, another reason why the disproportionate and narrow political interests like the US Chamber of Commerce are so toxic to the public well-being.
Posted by Unknown at 6:16 PM