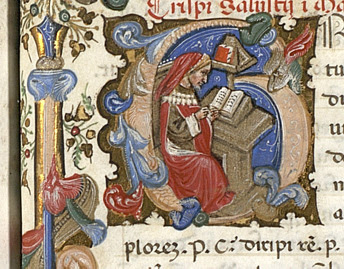 A Harvard researcher reports that information overload dates back hundreds of years—to the Middle Ages:


With the spread of paper in the late middle ages, then of printing after 1453, scholarship involved ever more reading: printed books, manuscripts, and letters. Scholars relied on note taking to retain what was useful from their reading. Some collections of notes, organized with finding devices, were published as reference books, in which readers could find the best bits from many books they wouldn’t have the time or accessibility to read.

The taking and reading of notes took vast amounts of time.

"They advocated studying at all times," [researcher Ann Blair] said. "They worked by candlelight early in the morning, and deep into the night, sharpening quills by knife, and drying the ink afterward with a sprinkling of sand. Everything was written out by hand, and if you wanted to store information in more than one place, or include it in a letter, you had to copy it out that many times."

Many scholars complained of damage to their eyes, and they "relied on letters to communicate with one another that could easily take weeks to get from one European city to another, and they constantly fretted about the mail not getting through at all."

I think the medieval scholars had it easy. According to Zuckerberg's Law, the amount of information shared between people on the Internet doubles every 18 months. Who even has time to take notes?
Posted by Unknown at 11:59 PM

Email ThisBlogThis!Share to TwitterShare to FacebookShare to Pinterest
Labels: internet