What if there was a machine that could automatically collect rubble from torn-down buildings and transform the material into new bricks? That’s exactly what designers Youngwoo Park, Hoyoung Lee and Miyeon Kim are proposing with their “Return Brick” recycling machine, which could help keep construction materials out of the landfill. The little robotic machine would search for small fragments of brick and concrete, grind them up, and reform those pieces into new Lego-like bricks, which are easier to stack and build with. 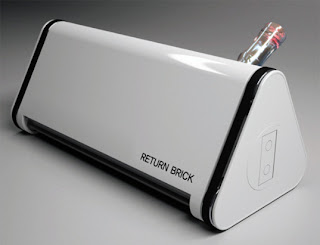 Recycling of many materials has become the norm in much of the developed world, and economically viable materials such as aluminum are routinely recycled into new products. Other materials can be recycled, but often are not, either because the virgin material is cheaper or because the recycling stream has too many impurities.

The economics are changing, however, because of increasing transportation expense and as overall life-cycle costs, once externalized, undergo greater scrutiny. Shipping raw materials between continents will become increasingly uncompetitive with locally sourced alternatives. Recycling and reuse also become more economically viable as the true costs of a throw-away mentality become clearer. As every homeowner and business knows, waste disposal is getting more expensive.

What else can we avoid putting in landfills? How about brick? According to Yanko Design, creator of the Return Brick, 89% of construction waste is brick and concrete, and much of it now ends up in landfills.

The machine works by finding and picking up brick fragments which are then pulverized. This powder is then mixed with water and a "hardening agent" and compressed. Finished bricks are ejected to the side of the machine.

The idea of a robot trolling around a construction site seems challenging based on sites I have seen. Apart from the rubble the machine would want to find, there is much equipment, uneven terrain, old coffee cups, nails, bits of plastic and many other contaminants strewn about. A traveling robot is probably less practical than a stationary machine into which the debris is fed. There are already ways to reuse brick, tips for recycling and a market for brick chips.Still, the idea to create fresh bricks, rather than uniform fill, has merit.
Posted by Unknown at 11:27 PM

Email ThisBlogThis!Share to TwitterShare to FacebookShare to Pinterest
Labels: Recycling