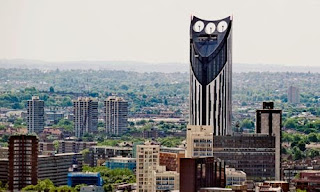 The so-called Electric Razor, or the Lipstick, is architecturally striking to be sure. It is "the kind of heroically stylised building, you would expect to see in some 1930s sci-fi movie: the perfect place for a hero and a villain to have a rooftop showdown."

One could picture Christopher Lee on top, shouting incantations.

At £113.5M to build it's also a pricey symbol of London's urban redevelopment.

The developers continue to claim the turbines will generate 8% of the building's power needs. However, I am skeptical. We'll know in about two years. They weren't turning at all on a recent day despite the wind. According to a woman involved in the overall redevelopment of the Strata's Elephant and Castle neighborhood:


That's because the people in the upper flats have complained about the noise and vibration, They'll probably never be used. 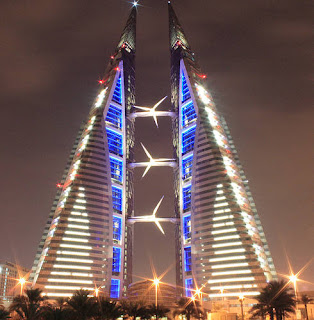 According to wind tunnel tests at scale, the sail-shaped towers funnel any winds within 45 degrees of the prevailing northerlies to blow perpendicularly through the turbines. The three 225kW turbines are expected to generate 1.1 to 1.3 GW per year, between 11% and 15% of the building's energy needs.

Although the turbines were first switched on in 2008, I cannot find data of actual generation.

The viability of building-mounted wind turbines appears poor. They're eco-bling.
Posted by Unknown at 11:56 PM