"Have They No Grandchildren?"

Contrarian hedge fund manager Jeremy Grantham in his July letter to investors (via):


Conspiracy theorists claim to believe that global warming is a carefully constructed hoax driven by scientists desperate for ... what? Being needled by nonscientific newspaper reports, by blogs and by right-wing politicians and think tanks? I have a much simpler but plausible ‘conspiracy theory’: the fossil energy companies, driven by the need to protect hundreds of billions of dollars of profits, encourage obfuscation of the inconvenient scientific results. I, for one, admire them for their P.R. skills, while wondering, as always: “Have they no grandchildren?”

He also makes the excellent point that the costs of not acting and being wrong far outweigh those of the relatively modest steps to prevent a (possible) disaster:


Pascal asks the question: What is the expected value of a very small chance of an infinite loss? And, he answers, “Infinite.” In this example, what is the cost of lowering CO2 output and having the long-term effect of increasing CO2 turn out to be nominal? The cost appears to be equal to foregoing, once in your life, six months’ to one year’s global growth – 2% to 4% or less. The benefits, even with no warming, include: energy independence from the Middle East; more jobs, since wind and solar power and increased efficiency are more labor-intensive than another coal-fired power plant; less pollution of streams and air; and an early leadership role for the U.S. in industries that will inevitably become important. Conversely, what are the costs of not acting on prevention when the results turn out to be serious: costs that may dwarf those for prevention; and probable political destabilization from droughts, famine, mass migrations, and even war. And, to Pascal’s real point, what might be the cost at the very extreme end of the distribution: definitely life changing, possibly life threatening.

The precautionary principle applies. See also this video I posted a year ago. 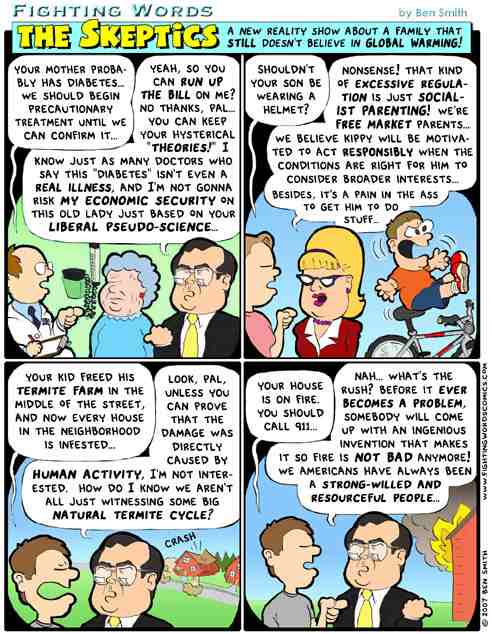