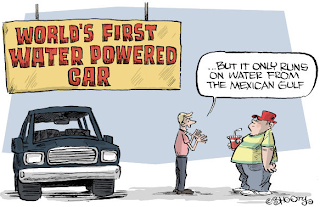 ~ Still thinking about water leaks today, which got me to thinking about oil leaks, especially since yesterday was the 3rd anniversary of the start of the BP Deepwater Horizon well fiasco in the Gulf of Mexico.

It started with the death of 11 people, and continued on with the gushing of nearly 5 millions barrels of oil over the next 3 months. 2 million gallons of Corexit, a toxic "dispersant", was dumped into the Gulf as well, with the misleading narrative that it was part of the "clean up" effort. The idea that one can fix a toxic mess by dumping more toxins on it is ridiculous on its face, but that's what happened, and it remains part of the standard procedure that Big Oil uses and intends to use in future. Worse, the practice is cited as a justification for how they should be allowed to continue the environmentally dangerous (and eventually disastrous) practice of drilling in ecologically sensitive areas like the ocean.

Dumping Corexit in the oil-besotted Gulf simply moved the oil from the surface down the water column to the ocean floor, where it remains today, poisoning the surroundings and entering the food chain. It is to Gulf cleaning as sweeping dirt under a rug is to house cleaning. Corexit hasn't cleaned up the Gulf nearly as much as it has BP's PR problem. We don't see images of writhing oil-soaked wildlife so much any more, but the deadly health impacts aren't gone. Corexit inhibits the natural (albeit slow) breaking down of oil by microbes, even as it makes the toxins more absorbent to people and animals. Corexit made the problem much worse.

The recovery in the Gulf has never been what we have been told it was, and policy-makers, abetted by public amnesia, continue to make poor choices on energy priorities. The industry and its political shills continue to insist that we should trust them when they swear (no, really!) that such a horror won't occur again, and, without irony, that if it does, they'll be ready. It's the same old promise, and is as hollow now as it was then. The real lessons and solutions are altogether different.
Posted by Unknown at 11:53 PM