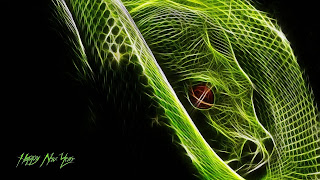 ~ That was a long hiatus.

Since I last posted we've entered the Year of the Snake. Some years are named after animals whose qualities are easier to admire, like the Dog, the Dragon, the Horse, and so on. It's more of a challenge for others, like the Rat and the Snake. I suppose I should give the Snake his due, but it's harder when his year starts with the most disreputable and snaky behavior on the part of our landlady. (The term landlady is far too respectable, so hereafter I will use a more suitable term.) 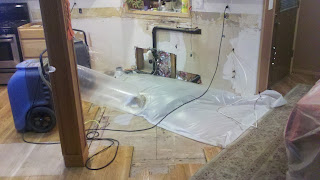 Snake pressures us renters to support her outright fib to the insurance adjuster that the damage had only just recently become evident. Our lease ended a year ago and we're month-to-month in a tight rental market. If we balk we'd likely be given notice, and we know we're going to have to move out anyway for the repair work. What can we do but play along?

The insurance adjuster works up all the details over about 4 hours, including replacement of the dishwasher, and the nearby floor. The cabinets all need to be moved, and the granite counter tops probably won't survive. The rest of the main floor is all the same hardwood, so the entire floor needs to be stripped and refinished to match the new part of the floor.

We have to move everything off the main floor and live in temporary digs for, we are told, 10-21 days. And hurry! Oh, and the snake's insurance doesn't cover any of our expenses of course. Fortunately, we have renters' insurance. Unfortunately, I have a business trip I can't reschedule, so I'm gone 4 days.

Fortunately, my wife is amazing; when action is required she never hesitates. Movers come and box and schlep everything out to storage somewhere. Our agent hands us off to a relocation and temporary housing partner who installs us in a "suite" at an extended stay hotel. I come back from my trip, from one hotel to my "home" hotel.

So, there we are in maybe 300 square feet, just the two of us, 2 cats and the puppy. We've got bags, boxes and suitcases of clothes, work stuff, pet stuff, and any number of things that we think we might need to last us 3 weeks. Our garage is full of stuff, as is the daylight basement. Masses of stuff are in storage who knows where. We can't find a thing we need.

After 3 days—good news!—they move us into a temporary apartment. Oh happy day! Much more room, full kitchen, covered parking, washer/dryer, etc. Maybe we would get through this without too much pain. However, it was not to be, and we came to refer to this place as The Hovel. It might perhaps have been a perfectly nice apartment if it was, you know, ours. But instead it was a furnished apartment, and I cannot figure out who might have furnished it, and exactly for whom it might have been furnished or what kind of brown acid was involved. I won't call it ugly, but it was aesthetically challenged at best. It also had numerous functional problems:
But the worst were the pachyderms above us. They must have been toe-less, because they seemed to walk solely on their heels. Some got in after the bars closed, while others were stomping about before dawn. Chuck E. Cheese is quieter.

We couldn't get out of there soon enough. So we were disappointed to hear that the snake's contractor was having trouble finding matching wood flooring. (Matching? What?) It was mid-February and we were told it might be mid-March until he could get it, and late March before we could move back in. 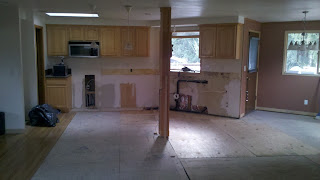 So we were quite surprised to go back to the house the next day (seeking kitchen supplies, socks and any number of other things) only to find several boxes of hardwood flooring sitting in our living room. We were also surprised to find the kitchen island and the refrigerator in there too. But the biggest surprise came when we looked in the box, only to find pre-finished flooring. 440 square feet of the simplest, plainest, pre-stained oak flooring that one might find at any Home Depot. Huh?

The good news is that the work was done by the end of February, and we ended up spending only 4 weeks in the Hovel. The bad news is that we suffered major disruption to our work, spent more time than we could afford on moving and moving again, and had our lives pretty thoroughly thrown out of kilter. And it cost us money. Meanwhile, our execrable snake actually made money on the whole debacle.

Here's how. The insurance adjuster did her work, and calculated what it would take to restore the house to an equivalent pre-leak condition. The insurance company then wrote the snake a check for the entire amount, which she put in her pocket. She then went and hired more of the same sorry "handymen", all of whom are doubtless friends of her family or family of her friends. They may be licensed (who knows?) but the work is shoddy and substandard. No we have a two-tone floor, because, no surprise, the new pre-finished flooring doesn't match the original floor. Worse, the newly laid floor is not smooth or well-joined. You can feel a ridge where each plank abuts its neighbor. Some of the swelling of the floor is also still there. The rest of the main floor was not stripped and refinished to match; instead there was a half-assed effort to spiff it up by applying some coating (urethane?) and buffing it. The buffing doesn't even go with the grain, so with light at an angle you can see scratches and spots of uneven application.

Some people have suggested to me that what she did is no big deal, it's just like with a car, right? The insurance company writes you a check, but you don't have to actually spend it to fix the car. Maybe so, but I recall my insurance company paying the body shop directly; I had no chance to pocket the money. In any case, they certainly don't pay for me to replace my engine if it seizes because I've never changed the oil.

So, she skimped on the repairs. The new dishwasher is the cheapest model available at Lowe's (I idly checked a few weeks ago) and it takes nearly 3 hours to complete its cycle. The water pressure is not what it was, and we wonder if there might still be a leak somewhere.

If you've never rented and had anything like this happen to you, congratulations. Here's a money aspect about all this you might not know. The snake's insurance paid her for loss of rent; part of the check she got was for 2 months rent we would otherwise have paid if we had continued to live there. Meanwhile, our insurance covers us for expenses above and beyond what we would normally incur. So, we didn't pay rent for February, but that same amount as deducted from the reimbursement we got for the movers. So we still had to pay, in essence, our same monthly rent, even though it didn't afford us a nice 3000 square foot house but a miserable Hovel.

In the context of how the rent reimbursement and deduction works, the timing of the repairs and the then-puzzling statements suddenly make sense. The snake tells her insurance company that the repairs will take until the end of March, so she gets rent from her insurance for March. Meanwhile, our temporary Hovel gets engaged an additional month, because timely notice is not given and it rolls over, even though we moved out in early March. So the snake has been paid rent for 2 months, and we have had to pay the same rent, not to the snake, but to our insurance company who is paying for the Hovel.

But we're back in our normal place in March and guess what? The snake demands we pay her rent for March! We protested she had already been paid for March and we had already paid rent for March (or would soon when settling up with the insurance) but she got very insistent. (Is greed still one of the seven deadly sins even if she doesn't die of it?) There were quite a few testy exchanges, but the snake relented at last, not because of any evident embarrassment over her unreasonable and grasping behavior, but because I made clear to her that I would make sure the insurance companies started talking to each other about the sequence of events in a little more detail...

One last lowlight. As the repairs were nearing completion, and we were itching terribly to get out of the Hovel and back to our regular lives, the snake announced that she had researched the local market and concluded that the rent she was charging was below-market. She announced she was raising the rent 15% and demanded a new one-year lease. With our stuff in 3 different places, our lives turned upside-down, and living in the Hovel, it was a very low blow. We don't think the old rent was out of line, and it is even less so with the unprofessional repairs. However, there's not a lot of available stock out there, especially for pet owners. She evidently wants to recover her deductible, and it appears she's going to get March rent from us after all, just over several months. She swears the additional money will allow her to tackle deferred maintenance (like the deck, the broken doorbell, the rotting fence...) and it would be swell if that's what happens, but events don't suggest that will be the focus...

Happy Year of the Snake everyone.


Folks who've known me a while might wonder what I'm doing renting rather than having my own place. Apart from the grass always looking greener across the way, we've been renting since the housing market started tanking in earnest. I'm perfectly happy not being a homeowner the last few years. When I'm a homeowner again, renting will probably start looking better... Finally, if my awesome and cool startup Phytelligence keeps going like it has I will likely be moving to Pullman anyway. More on that soon.
Posted by Unknown at 11:42 PM