Coffee is Your Friend 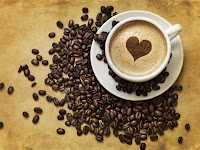 ~ OK, I lied. Here's more information that coffee is good for you:


Researchers primarily at the National Cancer Institute parsed health information from more than 400,000 volunteers, ages 50 to 71, who were free of major diseases at the study’s start in 1995. By 2008, more than 50,000 of the participants had died. But men who reported drinking two or three cups of coffee a day were 10 percent less likely to have died than those who didn’t drink coffee, while women drinking the same amount had 13 percent less risk of dying during the study.

Other studies have shown salutary effects on cancers and various kinds of dementia. Time to brew another pot!
Posted by Unknown at 11:21 PM

Email ThisBlogThis!Share to TwitterShare to FacebookShare to Pinterest
Labels: coffee